Aims: To assess the utilisation of laparoscopic resection for colorectal cancer and compare early oncological outcomes with open resection
Methods: A prospectively-maintained database of colorectal resections at our district general hospital was interrogated. Primary surgeon, operating time, oncological outcomes and urgency of surgery were measured. Chi-squared tests were used to compare groups; student’s t-tests were used to compare continuous data.
Results: From August 2011 to November 2011, 66 patients had colorectal resection for cancer (65 adenocarcinoma, 1 carcinoid tumour). Of patients with adenocarcinoma, 33 patients (50%) had a right-sided tumour, 19 patients had rectal tumour (29%) and 14 patients had a left-sided tumour (21%).
The majority of patients had a laparoscopic operation (22 patients with right sided tumour (66%), 10 patients with left sided tumour (71%), 14 patients with rectal tumour (74%).
For right sided tumours, there was no significant difference in node yield, operating time or distance from tumour to nearest longitudinal margin between laparoscopic and open procedures, though there was a tendency to longer operating time (204 minutes vs. 170 minutes, P=0.337) and greater node yield (20 nodes vs. 17 nodes, P=0.175) for laparoscopic procedures. Similar trends were found for left sided and rectal tumours, although none reached statistical significance.
A registrar (resident) was the primary surgeon in 9 patients (14%) and first assistant in 45 cases (69%). 22 patients had an emergency operation and of these, 7 had a laparoscopic procedure (32%).
Conclusions: There was a high volume of colorectal resections of which the majority were carried out laparoscopically. A third of patients who had an emergency operation had a laparoscopic resection. Early oncological outcomes and operating time were not significantly different for between the laparoscopic or open approach. Registrars had good exposure to colorectal resections as primary surgeon or first assistant in over 80% of cases. 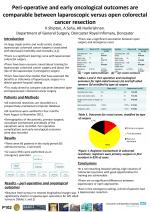