Introduction: Recurrent or persistent dysphagia after a Heller myotomy occurs in up to 10-15% of patients. Current surgical options for these patients include revisional Heller myotomy or esophagectomy. Both have significant associated morbidity. Recently, per-oral endoscopic myotomy (POEM) has been introduced as a novel therapeutic approach for the primary treatment of achalasia. POEM has shown encouraging early results in human clinical trials, but this technique has not been fully evaluated as a treatment for recurrent or persistent dysphagia following Heller myotomy. Our objective was to evaluate the feasibility of performing the POEM procedure in the setting of a prior Heller myotomy using a survival porcine model.

Methods: After obtaining IACUC approval, a laparoscopic Heller myotomy with Dor fundoplication was performed on 4 animals under general anesthesia. The Heller myotomy was positioned on the anterior esophagus and was at least 7 cm long with at least 2 cm extending onto the stomach. Four weeks after the initial operation, each animal underwent a second myotomy using the POEM procedure. An additional two animals served as controls and underwent only the POEM procedure. The POEM was performed on the posterior esophagus with a length of at least 7 cm and at least 2 cm of extension onto the stomach. Two weeks after each POEM procedures, animals were sacrificed and necropsy performed. The primary outcome measures were feasibility and survival. Secondary outcome measures included intra-operative complications, post-operative complications, and procedure difficulty. Procedure difficulty was assessed by total time of procedure, time of each procedure component, workload using the NASA-TLX validated scale, and objective scales for measuring dissection difficulty.

Results: The POEM procedure was successfully completed in all animals. Each of the 4 experimental animals survived and thrived following both the laparoscopic Heller myotomy and the subsequent POEM procedure. No intra-operative or post-operative complications were noted. There was no significant difference in operative time for the POEM after Heller compared to primary POEM (125.5 min vs. 117.5 min; p = 0.84). At time of necropsy, the myotomy was found to be complete and the animals were without infection, perforation, hematoma, or injury to nearby structures in all cases. Dissection difficulty was rated slightly higher for the POEM after Heller compared to the primary POEM; however, this was not statistically significant. NASA-TLX scores for the primary POEM and the POEM after Heller were similar suggesting equivalent workload (36 vs. 24.5; p = 0.24). The POEM procedures showed a significantly lower workload score when compared to the laparoscopic Heller myotomy (31.6 vs. 52.1; p < 0.001).

Conclusions: The POEM procedure for revisional myotomy after Heller myotomy is both safe and feasible in the porcine model. POEM has potential as a viable treatment option for patients suffering from recurrent or persistent dysphagia after prior myotomy. A POEM after previous myotomy does not appear to be more technically difficult or demanding than a primary POEM procedure. The POEM procedure may be associated with a reduced workload on the operating surgeon when compared to laparoscopic Heller myotomy with Dor fundoplication. 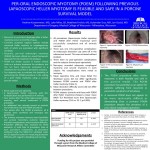