Peptic Ulcer Disease: Is there a surge for Surgical Intervention?

The discovery of Helicobacter pylori as the culprit in peptic ulcer disease (PUD) has revolutionized its management. Despite the presence of effective drug treatments and an increased understanding about its etiology, the percentage of patients who require emergent surgery for complicated disease remains constant at 7% of hospitalized patients. It is hoped that eradication of the offending agent will result in a decrease in the number of cases undergoing elective surgical interventions, as well as in PUD related complications and deaths. This study aims at reviewing the incidence of complicated PUD and analyze changes in surgical management and associated outcomes.
Patients and Methods: From January 2002 to September 2012, records of all patients with a clinical or radiological diagnosis of perforated PUD were evaluated. Short-term and long-term results were assessed with regard to type of surgical intervention. The primary end point was adverse events. Other endpoints were length of hospital stay, complications and deaths.
Results: Included were 400 patients with a median age of 56 years (range: 17-89). Of these, males made up 70% (n=280), were older and had more comorbidities. Majority of perforations were located in the prepyloric region (80%) and duodenal bulb (20%). Non- steroidal anti-inflammatory drug (NSAID) alone was involved in 50% of cases and in combination with Helicobacter pylori (H.pylori) in 84%. H.pylori alone occurred in 40% of cases. The diagnosis of gastroduodenal perforation was made clinically and confirmed radiologically. Computed tomogram was the initial diagnostic tool in 95% of patients.
Most patients (84%) presented within 12 hours of the initial abdominal pain (range: 2-36hours). Peritoneal culture was positive in 15% of patients who presented within 12hour and 60% in those who presented late. Laparoscopic treatment was performed in 48 patients (12%) who remained hemodynamically stable. Mean operating time was 2hours (range: 1.5-3hours). In the remaining 88% of patients, open approach was employed. Simple closure with omentoplasty was performed in 98% and in 2%; definitive anti ulcer procedure was performed. Postoperative analgesic requirement was less following laparoscopic approach. Major complications occurred in 6% with an overall 30-day mortality rate of 2%. Most postoperative morbidity occurred following open approach. One patient who had laparoscopic repair died of other causes unrelated to the gastroduodenal perforation. Among the laparoscopic group,
Mean hospital stay was 4 days (range: 3-7days), compared to 6days (5-14days) following open approach.
Conclusion: Although the incidence of PUD is decreasing, it appears that among our patients, the incidence of complication is rising. Laparoscopic approach offers an alternative treatment with less pain, shorter hospital stay and improved complications rate. 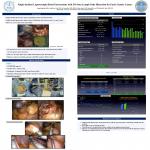