Obesity has reached a state of a global epidemic. No society therefore no health system is spared from the effects of the disease. Percutaneous Endoscopic Gastrostomy (PEG) tube is frequently used in patients with swallowing dysfunction. Each year more than one hundred thousand PEG placement procedures are performed in the United States. Despite the frequent use of the technique and the ever increasing prevalence of obesity we could only find four papers in the medical literature on PEG placement and obesity. Our search of National Library of Medicine revealed only one article published on outcomes of obese patients undergone PEG placement.

In this study we would like to present our experience on PEG placement on the obese patient at an Academic Medical Center.

Patients and Methods:
All patients undergone PEG placement between 2006-2010 were retrospectively analyzed based on gender, body mass index, type of pathology, indication for PEG placement outcome, type of complication encountered and hospital stay. Patients who had a BMI over 30 kg/m2 were compared to normal BMI group in terms of complications. We later further analyzed the type and frequency of the complications encountered.

The complication rate was 28% in the obese patient group vs. 27% in the normal BMI group. Overall complication rate was 27.6%.Chi square statistical analyses showed no significant difference between two groups. Types of complications encountered in the obese group were ileus 4.1% , Peristomal infection in 6.8%, buried bumper in 2.7%, gastric ulcer in 1.6%, inadvertent removal in 14%, aspiration in 6.8%, hemorrhage in 1.4%, 11% of patients died within 30 days.

Analyzing indications, co-morbidies and outcomes, we have observed that PEG placement has a similar safety profile in the obese patient group compared to the normal BMI patients. Despite the procedural challenges due to body habitus, we believe that PEG placement can be utilized as a safe tecnique to be used in the obese population requiring long term nutritional support. 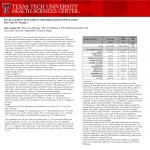