Introduction: Adjustments are an integral part of the success of the laparoscopic adjustable gastric banding. Without these adjustments, successful weight loss is not possible. Fear and pain could create barriers for patients to receive their proper band adjustments. It is important to understand the patient’s perception of adjustments. The objective of this study was to characterize the perception on band adjustments in patients who had undergone laparoscopic adjustable gastric banding.

Methods: Consecutive patients who had undergone laparoscopic adjustable gastric banding were given an IRB exempted survey. This survey ascertained the patients’ thoughts on difficulty getting adjustments, difficulty scheduling adjustments, pain of adjustments, and fear before first adjustment. The responses were on a Likert scale of 1 to 10. Higher scores were a more positive response (no fear, no pain, and no difficulty). All band adjustments were done by a bariatric surgeon with the use of local anesthesia under fluoroscopic guidance.

Results: There were 27 patients in this series. The patients had an average of 4 adjustment of the band. They relayed an average of 5.0 for fear before their first adjustment but less pain (7.5) from the adjustment. The patients did not report that it was difficult to either schedule or get an adjustment (8.0 and 7.9 respectively). However, 60% would rather have a band that could be adjusted without a needlestick.

Conclusions: While many patients would rather have a band that did not require a needlestick for the adjustments, the amount of pain or difficulty of the adjustment was not high. Patients do have some fear before their first adjustments. Bariatric surgeons who perform laparoscopic adjustable gastric banding to be aware of this fear and take steps to address this during the preoperative education process. 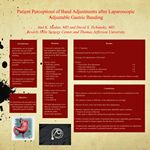