INTRODUCTION: Surgical referrals for refractory gastroparesis (GP) are becoming more common as medical options are limited. Supplemental intestinal alimentation via feeding jejunostomy tubes (JT) is required to treat underlying malnutrition in only the most severe cases. The aim of this study was to determine predictive factors associated with successful restoration of oral nutrition after insertion of a JT for patients with severe malnutrition associated with GP.

METHODS AND PROCEDURES: Retrospective chart review of all patients referred to our surgical practice for refractory GP from November 2007 to October 2016.  Patients treated with a JT were identified.  Baseline demographics, comorbidities, objective studies, symptom scores and operative details were recorded. The primary outcome was successful return to independent oral intake defined as removal of the feeding tube without additional supplementation (TPN).  Patients were divided in 2 groups; those that had successful restoration of oral alimentation (SUCCESS) and those that remained JT dependent (FAILURE). Univariate analysis was performed followed by logistic regression to identify independent predictors for the primary outcome.

RESULTS: Forty-six out of 555 (8%) patients referred for GP required JT insertion to treat malnutrition. Etiology of GP included: 67% Idiopathic, 22% Diabetic, 11% Post-surgical. Thirty-six patients (78%) reported severe daily symptoms. Twenty-five patients (55%) had successful return to oral intake while 21 (45%) required prolonged feeding access, reinsertion of a JT or TPN initiation. On multivariate analysis patients who had a pyloroplasty (p=0.003, OR 6.6) and those who were married (p=0.043, OR 3.8) were found to be independent predictors of successful discontinuation of tube feedings. On subgroup analysis 4-hour gastric emptying time normalized after pyloroplasty (p=0.008) in patients which had a successful re-initiation of oral intake while persistent gastric emptying refractory to pyloroplasty was associated with failure. The group of patients who underwent pyloroplasty did not differ in terms of demographics, marital status (p=0.192) and preoperative gastric emptying (p=0.492) from those who did not. GP etiology (p=0.585) psychiatric conditions (p=0.277) and substance abuse (p=0.354) were not associated with failure to return to independent oral intake.

CONCLUSIONS: Malnutrition requiring feeding JT tubes is a rare complication of gastroparesis. When the disease has progressed to this stage, successful return of oral alimentation is achieved in half of the patients. Pyloroplasty seems to substantially increase the likelihood of liberation from tube feeds and should be considered at the time of JT placement. 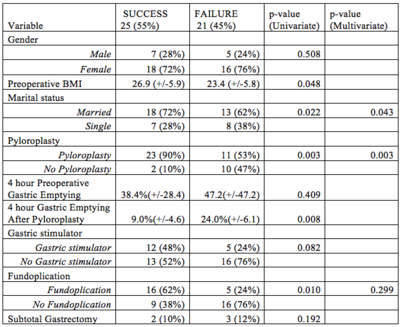