Background: Paraesophageal hernia (PEH) incidence increases with age, as these hernias are unusual before the sixth decade of life. PEH manifests itself mainly with obstructive type symptoms. In the emergency setting, most PEH repairs are done via laparotomy with adjunct gastropexy or gastrostomy tube (GT) placement. This adjunct to the repair can be performed expeditiously by laparoscopy using T-fasteners for anchoring and retraction of the stomach. We report our experience and laparoscopic approach for PEH repair in the emergency setting and how the presence of obstructive symptoms in the elderly patient with severe comorbidities can influence the repair technique.

Methods and procedure: A retrospective review of elderly patients (≥ 75 years-old) with high operative risk (ASA ≥3) that underwent PEH repair in the emergency setting from July 2014-July2016 was performed. Patients with obstructive symptoms in the absence of reflux type symptoms were included. Patients who underwent laparoscopic repair were identified. T-fastener, laparoscopic gastropexy is performed percutaneously by dislodging into the lumen of the stomach a nylon suture connected to a metal T-bar and leaving an external suture at the surface of the skin; for a GT, a guide wire is placed through the center of these fasteners, and a balloon catheter is placed over the guide wire. Three to 4 fasteners are require for anchoring.

Result: Thirteen patients underwent successful PEH repair, and all were classified as urgent/emergent upon admission. The mean average age was 83.5 years. Open procedure was performed in 69.3% of patients and 30.7 % laparoscopically. In the absence of reflux type symptoms, both open and laparoscopic cases a GT or gastropexy were performed for fixation of the stomach. Crural closure was performed in four patients. There were no mortalities. One patient in the laparoscopic group required conversion of gastropexy into a GT for dysphagia. Faster recovery and shorter operative time was seen in the laparoscopic surgery group. Prolonged length of stay was related to post discharge institutionalization. All patients remained free of obstructive symptoms.

Conclusion: Laparoscopic reduction of hernia contents with adjunct gastropexy or GT should be considered in emergent cases for elderly patients with mainly obstructive symptoms. Cruroplasty should be done selectively. Laparoscopy for PEH repair is challenging and requires technical skills. T-fastener gastropexy or GT is safe and simple, obviates intracorporeal suturing, and may be used to improve physician comfort with laparoscopy and expedite the repair for this high –risk population. 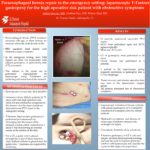