Pancreatic Pseudocyst: A complex problem with a sequelae of recurrent pancreatitis

Pancreatitis has traditionally been a very difficult disease to manage surgically. More recently, the development has been finding minimally invasive methods of diagnosing and treating complex pancreatitis process that is refractory to medical management.

We present a case of severe gallstone pancreatitis complicated by pseuocyst formation in a 64 years old female patient. Pseudocyst was noted on CT scans performed after she failed to recover in an expected fashion with appropriate supportive care. Patient eventually became symptom free and discharged from the hospital. Two month later, she underwent definitive concomitant laparoscopic endoscopy-assisted cysto-gastrostomy and laparoscopic cholecystectomy. Patient recovered post-operatively without any initial complications but developed recurrent pancreatitis 6 month later. Conventional imaging during that hospital stay did not identify the cause of the recurrence. An outpatient endoscopic ultrasound was performed after that acute episode. Ultrasound study showed a pancreatic head with dominant dorsal duct, an absent pancreatic body with hyperechoic scar in its place, and a remnant pancreatic tail with a patent duct that is not in communication with remaining pancreas. This remnant tail was believed to be the source of the recurrent pancreatitis

To date, the literatures has predominantly focused on the progressive advancement in the treatment of pancreatic pseudocyst. There is minimal description of combined minimally invasive cysto-gastrostomy and cholecystectomy. This is the first description of a cysto-gastostomy performed using transgastric ports and endoscopic assistance, hence limiting the extent of gastrostomy. This also describes both procedures performed using the same port sites.

The days of high mortality open surgery is limited. The future of complex pancreatic disease is in the hands of laparoscopic surgeons and the endoscopists. 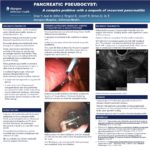