Outcomes of Single Incision Cholecystectomies in a Non-select Patient Group

Introduction: Over the past two decades, laparoscopic cholecystectomy has replaced open cholecystectomy as the standard of care for benign gallbladder disease. Recently, attempts have been made to remove the gallbladder through single skin incisions to improve the cosmetic, and possibly other surgical outcomes such as pain. This more complex approach is generally thought to be associated with a longer operative time, and suitable for the less obese patients with no past abdominal surgical history. Here we report our experience with single incision cholecystectomies, looking at operative times, complications rates and patient demographics. 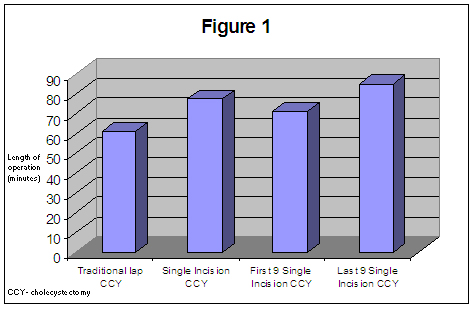 Conclusions: Single incision cholecystectomy is a safe and effective alternative to the traditional laparoscopic cholecystectomy. Although it is an emerging field, it does not appear to be limited to non-obese patients. This type of surgery also appears to be feasible in patients with previous intra-abdominal surgeries.