NTRODUCTION – Bariatric surgeries performed at our institution consist of Laparoscopic Roux-en-Y Gastric Bypass (LGBP) or Laparoscopic Sleeve Gastrectomy (SG). These are done with either a surgical resident or a minimally invasive fellow as the assistant. The purpose of our study was to compare outcomes of resident or fellow assisted bariatric surgery.

CONCLUSION – Resident assisted bariatric surgery is safe and does not increase complications when compared to fellow assisted. The operating room time is increased with resident involvement in bariatric surgery. 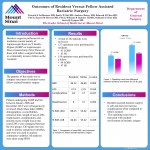