Introduction: The purpose of this study was to investigate outcomes for adult patients undergoing laparoscopic vs open surgical repair for intestinal malrotation. Intestinal malrotation results from errors in fetal intestinal rotation and fixation beginning in the first trimester of pregnancy. Most patients are diagnosed in childhood, typically before two years of age; however, some patients remain undiagnosed into adulthood. Laparoscopic repair is now an accepted alternative to laparotomy in children but has not been well-studied in adults.

Methods and Procedures: After IRB approval, a retrospective chart review was performed for all patients ≥ 18 years of age diagnosed with intestinal malrotation presenting to a single tertiary-care institution from 2002 – 2013. Data collected included: age at diagnosis; pre-operative diagnosis; details of pre-operative imaging, surgical management, and complications; rates of re-operation, and symptom resolution.

Results: Twenty-two patients were identified (age range 18 – 63). Fifteen patients were diagnosed pre-operatively; 4 received an intra-operative diagnosis of malrotation during an elective procedure for an alternate diagnosis. Twenty patients had some type of pre-operative imaging (data not available for one patient), with CT being the most common imaging modality employed (77.3%). Four patients had volvulus.

Six patients underwent successful laparoscopic repair; an additional three began laparoscopically but converted to laparotomy. There were no significant differences in age, operative time, or estimated blood loss between the two groups. There was a trend toward reduced need for nasogastric (NG) tube in the laparoscopic group (1.86 ± 2.7d vs 5.67 ± 4.1 d, p = 0.07), and a statistically significant difference in length of stay (5.0 ± 2.5 d vs 11.6 ± 8.1 d, p = 0.0148).

Conclusions: Laparoscopic Ladd’s repair appears to be safe and effective in adults. While small numbers limit our ability to identify important differences, there was a statistically significant decrease in LOS and a trend toward decreased need for postoperative nasogastric decompression. There were no significant differences in major or minor complication rates, need for re-operation, or persistence of symptoms between the two groups. 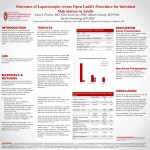