Outcomes of Laparoscopic Colectomy in Younger and Older Patients

Introduction: Prior studies reported safety and effectiveness of laparoscopic colectomy in older patients, however impending changes in health care reimbursement will require knowledge of costs related to the index hospitalization, post-discharge care, and readmissions. The goal of this study was to examine the impact of laparoscopic colectomy on discharge destination and 30-day readmission rates in younger (age:19-64 years) and older patients (age:65-90 years).

Conclusions: Laparoscopic colectomy offers the benefit of the lower level of post-discharge care for both younger and older patients, however regardless of technique age appears to be associated with a greater exposure to post-acute care costs and resource consumption. 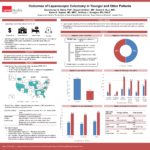