Introduction: Early postoperative afferent/efferent limb obstruction is a rare complication following reconstruction of total or partial gastrectomy. The condition is mainly attributed to kinking of the jejunal limbs or gastro-jejunal or jejunojeunal anastomosis. Less was known regarding the treatment outcome of endoscopic placement of large bore naso-jejunal tube for prolonged jejunal limb stenting in patients with early postoperative jejunal limb obstruction after gastrectomy.

Methods: All patients diagnosed of afferent/efferent limb obstruction within 8 weeks after gastrectomy were included. Patients with malignant jejunal limb obstruction, clinical signs of sepsis, instability or concomitant anastomotic leakage were excluded. All patients underwent endoscopic dekinking and placement of naso-jejunal tube using 16-French single lumen plastic nasogastric tube over a guidewire across the obstruction segment under general anesthesia. In brief, upper endoscopy was performed and intraluminal acute angle of jejunal segment was identified. A soft guidewire was negotiated across the acute angle point facilitated by fluoroscopy. The endoscope was then further advanced over a soft guidewire to pass across the kinking area under fluoroscopic monitoring. A soft guidewire was then replaced by a Savary-Gilliard wire (Fig below: an acute angle at jejunojejunostomy demonstrated by the arrow head after D2 total gastrectomy with Roux-en-Y esophagojejunostomy). A 16-French tube was placed across the kinking segment over the guidewire. Successful naso-jejunal tube placement across the obstruction point was confirmed by contrast study (Fig above: a kinking segment was stented by a naso-jejunal tube). All tubes were left in place for 14 days for stenting purpose and feeding in some patients. Complications, technical and clinical success were evaluated. 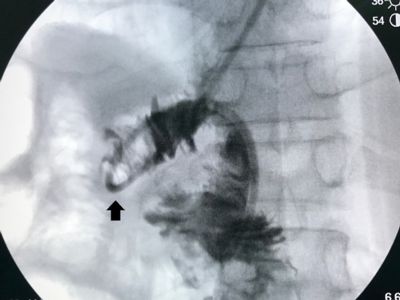 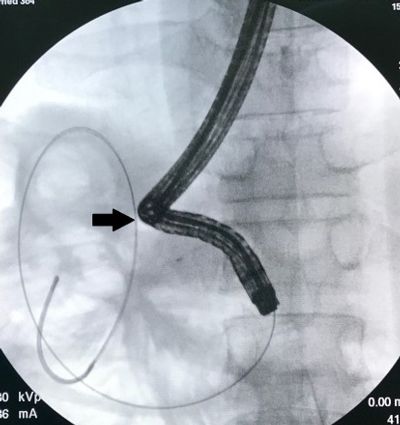