INTRODUCTION
Laparoscopic total gastrectomy (LTG) with dissection of the regional lymph nodes has some technical difficulties in dissecting lymph nodes at the supra-pancreatic area. To reduce this difficulty, we have used coaxial scope setting.
Our procedure is shown as follows:

SURGICAL PROCEDURE
1. Five trochars were used in this procedure.
2. The operator was located between patient legs and the monitor was located over the patient head. Under laparoscopic view, the left gastroepiploic vessels were clipped and cut and the dissection for lymph nodes along the left gastroepiploic vessels was made. The right gastroepiploic vessels were clipped and cut and the inflapyloric lymph nodes were dissected. The duodenum was cut using linear stapler.
3. The lymph nodes along the proper hepatic artery was dissected and the right gastroepiploic vessels were clipped and cut. The inflapyloric lymph nodes were dissected. The common hepatic artery and the splenic artery were exposed, and the lymph nodes along these vessels were dissected. The left gastric vein was clipped and cut. This procedure was performed under a very nice surgical view by pulling up the gastropancreatic folds to the anterior abdominal wall. The lymph nodes around the left gastric artery and the celiac artery were dissected. The left gastric artery was divided after double-clipping.
4. The abdominal esophagus was exposed and clamped. The esophagus was cut and sutured as a preparation for 25-mm anvil. Then 25-mm anvil was placed in the esophagus. The stomach was put into the plastic bag not to contaminate the peritoneal cavity.
5. The small 45-mm incision was made below the navel and the stomach was taken out from the body. The jejuno-jejunostomy of Roux-en Y anastomosis was made first and the small incision was sealed using the glove. Under a very nice laparoscopic view the esophago-jejunostomy was made by 25-mm circular stapler inserted through the glove.

RESULTS
We have performed LTG with dissection of the regional lymph nodes (D1+) for gastric cancer patients. Dissecting lymph nodes at the supra-pancreatic area was easier in our procedure with coaxial scope setting. 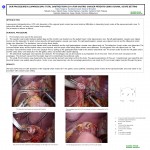