INTRODUCTION: Simulation-based training has become an integral part of most residency training programs in the US. The objective of this study was to assess whether operative time and pigs’ mortality rate can be used as outcome measures of residents’ operative performance during a structured laparoscopic training course in the animal lab.

CONCLUSIONS: In this study, we demonstrated that operative time and mortality rate in a porcine model can be used as outcome indictors to assess residents’ operative performance in a simulated environment, especially due to its similarities to human subjects. In spite of its costs and other logistical issues, this study shows the value of using live porcine models for resident training, as a preparatory adjunct to hands-on operative experience 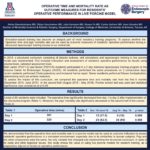