Operating in the Comfort Zone: Interns Perform Better with Straight over Articulating Instruments

Introduction: Laparoendoscopic Single-Site surgery (LESS) is a surgical technique performed using a single, small incision typically within the patient’s umbilicus. LESS presents several technical challenges for the surgeon compared to conventional laparoscopy: a single incision causes intra- and extra-corporeal collisions, limits the ability to triangulate instruments, and the view of instruments is inline and transposed (i.e., the surgeon’s right instrument operates on the left side). As an emerging technique surgeons have relied upon conventional laparoscopic instrumentation, which were not designed specifically for LESS. To enable surgeons to perform LESS more efficiently, effectively and most importantly safely, research must identify and eventually enhance the performance abilities of such instruments for surgeons. As an initial step toward technique and instrumentation optimization, the aim of this study was to objectively compare the technical performance and usability of three different instruments (one straight and two articulating) within a LESS training simulator.

Results: The mean time to complete the FLS peg transfer task was significantly less using the pair of straight tools (ANOVA, p=0.005). Participants performed comparably using all instruments with respect to errors. Although there were more total recoverable errors (i.e., dropped pegs that were picked up and successfully transferred) than non-recoverable, the total number of errors did not differ across instruments.

Discussion: Even with a similar number of total errors, trainees performed significantly faster when using standard straight laparoscopic instruments in the LESS environment. This study suggests that articulating tools may not be intuitively understood bysurgical interns. Given the inherent complexity of articulating instrumentation, further work to characterize the learning curves of surgical trainees for LESS is needed to better understand the true potential of the instrumentation and understand the training needed in order to attain and maintain proficiency. 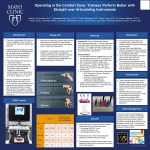