INTRODUCTION- With increased utilization of VSG, there is clearly a need to minimize associated morbidity: proximal gastric leaks, staple line bleeding, strictures and severe reflux symptoms. Disruption of gastric ligaments associated with VSG, might result in tortuosity, L-shape kinking resulting in “functional” stricture. Role of omentopexy in potential reduction of morbidity was retrospectively analyzed in this study.

PATIENTS AND PROCEDURES- In consecutive series of 179 VSG, 91 procedures were done without OP (control) and 88 – with OP (study group). There were no difference in patients characteristic between groups (age, sex, BMI, frequency of cruroplasty or hiatal hernia repair). Analysis included 90 day morbidity, utilization of postoperative endoscopy, balloon dilatation of strictures, %EBWL at 6, 12 months and daily use of antacid medications at 1 year. One year follow-up data were available for 30% of patients in the study group and 80 % – in control group.

CONCLUSION- With all the limitations of retrospective analysis and length of follow-up in the study group, omentopexy appears to contribute to reduction in short and long-term morbidity. Even tubular VSG and its C-shape fixation provided by OP are associated with decreased clinical reflux symptoms and strictures. 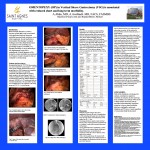