Background: Despite improved surgical technique and instrumentation, anastomotic leak rate following hybrid minimally-invasive esophagectomy can be as high as 10%, leading to increased hospital stay and mortality. We sought to determine if leak rates decreased with the use of an omental-flap to buttress the anastomosis.

Method: A retrospective review was performed of all patients who underwent hybrid (via laparoscopy and mini-thoracotomy) minimally-invasive Ivor-Lewis esophagectomy at our tertiary academic medical center from 2009 to 2014. Patients were divided into two groups: those who with omental-flap buttressing (omental coverage of intra-thoracic staple lines) versus those without. The omental buttress was created by laparoscopically fashioning a long omental pedicled flap in the abdomen and bringing it up into the thorax. Thirty-day morbidity and mortality, as well as clinically relevant long-term stricture rate were compared between the two groups.

Results: A total of 119 patients were reviewed during this period. All operations were conducted by the same surgical team consisting of a thoracic and a general surgeon. Ninety-eight (82%) patients underwent a hybrid minimally-invasive Ivor-Lewis esophagectomy. Patient demographics did not differ between the two cohorts. Fifty –four (55%) patients did not have the omental-flap buttress while there were 44 (45%) patients had the buttress. Preoperative chemoradiation, cancer staging, and tumor locations were not significantly different between groups. Four of the five (80%) reoperations were performed for anastomotic leak, and omental-flap buttressing was associated with fewer anastomotic leaks and reoperations (Table 1). In up to a two year follow-up, there were no differences in anastomotic stricture rate. Thirty-day mortality was 1% in the leak group and 0% in the non-leak group. 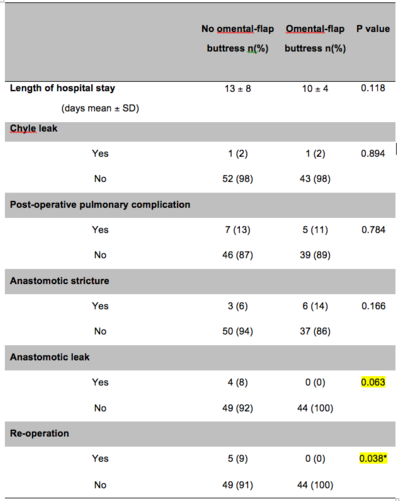 Conclusion: The use of an omental flap to buttress the esophagogastric anastomosis during minimally-invasive esophagectomy is technically feasible. This technique decreases the incidence of postoperative anastomotic leak with a minimal associated risk of long-term stricture development.