Thus, we retrospectively reviewed our experience in laparoscopic splenectomy comparing outcomes between younger (<65) and older (≥65) adults. We hypothesized older adults would experience higher complication rates and length of stay.

METHODS: Elective laparoscopic and hand-assisted splenectomies performed between 2003 – 2012 at our institution were retrospectively reviewed. Patients were excluded if splenectomy was not performed alone or if splenulectomy only was performed. Patients were stratified into younger (<65) and older (≥65) adults. Patient characteristics (age, gender, BMI, Charlson comorbidity index, ASA), operative characteristics (OR time, approach, blood loss, spleen weight, and spleen interpole length) and post-operative characteristics (length of stay, Clavian-Dindo score, and re-operation or death within 30 days) were compared between groups.

RESULTS: One hundred forty-six splenectomies were performed. The average age in each group was significantly different (45.4 vs 74.8 years). There were no differences in gender distribution between groups. Older patients had significantly lower BMI’s (27 vs 30); potentially due to chronic disease. Older patients were more co-morbid; evidenced by significant differences in ASA, Charlson comorbidity index, and frequency of hematologic malignancy. (2 vs 3, 2 vs 5, 23.4 vs 46.4%)

There were no differences in length of stay and re-operation or death within 30 days. (4.3 vs 6.9, 1 vs 4, 0 vs 1) There were significantly more complications in the older group. This difference is almost entirely represented by grade 1 and 2 Clavian-Dindo complications.

CONCLUSION: Despite differences in co-morbidities and the technical challenges with massive splenomegaly in older adults, perioperative complications were only modestly increased. Laparoscopic splenectomy should be the preferred operative approach in most elective splenectomies. 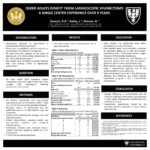