Background: Pelvic lymphadenectomy has always been considered as a gold standard method in staging of prostate cancer. It is also worthy to note that to this date there is no consensus within the medical literature concerning localized prostate cancer LPC on the ideal number of lymph nodes LN that should be removed in order to cause a beneficial outcome to patients.

Aims: To find an optimum number LN which are removed during pelvic lymph node excision in radical prostatectomy for LPC which has an influence on post-operative outcome in terms of the following parameters; post-operative complications, biochemical recurrence (BCR), pathological TNM and pathological Gleason score.

Conclusion: No clear cut off point can be drawn from the available literature in regard to the optimum number LN that can be removed during pelvic lymphadenectomy that may influence post-operative complications in patients with localized prostate cancer. The highest reported complication was lymphocoeles. Data also illustrated that the higher the number of LN removed (23.1) during pelvic lymph node dissection in radical prostatectomy for localized prostate cancer the greater the number of patients with BCR is uncovered (Jindong et al. 91% of patients )

In the absence of large sample single-center studies ,a unified reporting system is highly warranted in future studies for better analysis comparative evaluation toward a more definitive cut off point of optimum number LN which are removed during pelvic lymph node excision in radical prostatectomy for LPC 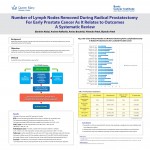