OBJECTIVE: Natural orifice translumenal endoscopic surgery (NOTES) is still a new and investigative technique. To date, published short-term outcomes have been promising. Little is known about the long term effects of novel access routes for standard surgeries. Here we present long-term data of the first human transgastric cholecystectomies performed one year ago.

METHODS: Four patients underwent transgastric cholecystectomy between May 2007 and October 2007. Each completed SF-36 quality of life questionnaires at one month and one year after their procedures. One month and one year SF-36 data were analyzed according to RAND SF-36 methodology and compared to 1998 U.S. norm-based data. Responses are grouped into standard 8 categories: physical functioning (PF), role limitations due to physical health (RP), bodily pain (BP), general health perceptions (GH), vitality (VT), social functioning (SF), role limitations due to emotional problems (RE), and general mental health (MH). Each patient was also asked two questions, “Would you go through this procedure again?” and “Would you recommend this procedure to others?”

CONCLUSIONS: Four weeks after undergoing transgastric cholecystectomy, patients in our series reported high quality of life scores, comparable to the general population. These scores continued to improve one year later. Satisfaction with the procedure was excellent. Transgastric cholecystectomy appears to be a safe procedure with good long-term outcomes. It will be important to see how these results translate to larger patient populations. 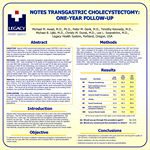