Conventional multi port surgery has now been accepted as safe and reliable in colorectal cancer surgery in terms of oncological clearance and patient morbidity. Recent advances have gravitated toward using a single port or access for a right hemicolectomy. At this early stage, available data in single centres are small in number as with comparative studies between the conventional versus a single access methods. The aim of this study is to compare the conventional multi port laparoscopic surgery with single access laparoscopic surgery (SAL) for right hemicolectomy. The study was conducted in Hospital Kuala Lumpur under the Department of Surgery, Universiti Putra Malaysia. The surgeries were done by a team of 4 surgeons. All right hemicolectomy surgeries were done laparoscopically. No randomization was done. The cases collected were from January 2010 till December 2011. The first port insertion was done by a 12mm trocar optical entry method, subsequent ports were inserted under direct vision. For the single access method, a 4 cm omega shaped skin marking was done and 3 ports were used, two 5mm and a 12mm. Straight laparoscopic instruments were used as with medial to lateral dissection . The mobilized bowel was brought out via an enlarged umbilical wound protected by an Alexis wound retractor. Resection and side to side anastomosis was completed with staplers. The wound was closed in a single layer with non absorbable sutures. Skin closure was with similar sutures via an umbilicoplasty. Post operative pain control was with intravenous Tramadol. Parameters observed were operative time, post operative pain score, TMN staging, lymph node yield and number of involved nodes, involved margins and complications. A total of 21 cases were done during the study period, 3 SAL in 2010 and 8 in 2011. The mean age was 63.3 and 60.6 for conventional and SAL hemicolectomy respectively. Operative time was also similar with a mean of 166.6 minutes and 134 minutes respectively. Both were statistically insignificant. Pain score difference was statistically significant with a p value of 0.001. In regards to oncological clearance, all except 1 case was a T2 tumour, the rest of the cases was staged as T3. Nodal status ranged from N0 to N2. Lymph node yield in conventional laparoscopic surgery ranged from 8 to 50 nodes while in SAL hemicolectomy nodal yield ranged from 10 to 22 nodes. All cases had clear surgical margins. No complications were observed. With less pain patients are able to ambulate much faster thereby reducing post operative complications arising from prolonged rest in bed. However SAL has a steeper learning curve as there is a disadvantage from the lack of triangulation found in conventional techniques. More experience is needed and larger studies are required to assess the long term effects. 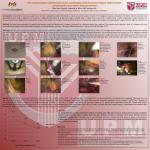