INTRODUCTION: Laparoscopic major liver resection is becoming increasingly common. However, mini-laparotomy is a must to retrieve the large specimen from the abdominal cavity. We have performed over 130 cases of laparoscopic hepatectomies and recently have created a useful needle device which is a multitask, sectional “drumstick” that can be assembled inside the abdominal cavity. It is used as a retractor, aspirator, and a water dripping instrument for bipolar cautery at the time of liver resection. We also invented the novel concept of “nested surgery” and introduced the “pouch-in-a-pouch” technique to minimize the destruction of the abdominal wall. Combining these ideas together with single-incision or reduced port laparoscopic surgery enabled us to proceed to the next level of minimally-invasive major liver resection.

TECHNICAL KEYPOINTS: An intraumbilical, vertical, 2.5 cm incision was made and the SILS port (Covidien, Norwalk, CT, USA) was introduced into the abdomen. One 12mm and two 5 mm trocars were placed through the port and the pneumoperitoneum was induced at 8 mmHg. A 5 mm flexible fiberscope was used in all operations. <”Drumstick” device> Liver parenchymal transection was accomplished with the ultrasonic coagulating shears and the ultrasonic aspirator. Our original needle device, Drumstick, was punctured through the upper abdominal wall. This device was assembled inside the abdominal cavity and played multiple roles including retraction to control the transection plane, aspiration of hemorrhage, and a water dripper for hemostasis with bipolar coagulation. <”Pouch-in-a-pouch” technique> The resected lobe of the liver was placed in a large pouch (intestinal bag) within the abdominal cavity. Then, only the opening of the pouch was pulled through the umbilicus. SILS port was re-inserted in the opening and pneumoperitoneum was established inside the pouch. The resected liver was re-incised into pieces so that each of them could be contained to a smaller pouch (“Pouch-in-a-pouch”), by carefully avoiding injury to the tumor. The small pouches were removed one by one from the umbilicus and finally the large pouch came out without extending the incision.

CONCLUSION: Minimally-invasive liver resection proceeds to the next level with our innovative device and the concept of “nested surgery.” Significant improvement is achieved in the exposure of the surgical field, liver parenchymal resection and hemostasis, and minimization of the surgical incision. 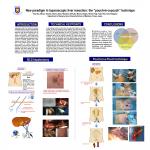