Introduction
The NOTES (natural orifice transluminal endoscopic surgery) and SILS (single incision laparoscopic surgery) were two recent progresses in minimally invasive surgery. The effort of NOTES and SILS was try to decrease the numbers of ports and minimized the size of incision in laparoscopic surgery and give patient better cosmetics, less pain and quickly recovery. However, there were critics of NOTES and SILS such as little true patient benefit, increased complexity of technique and increased extra-cost compared with conventional multi-port laparoscopic surgery. So far, in conventional laparoscopic colectomy, an abdominal mini-incision was always needed for removal of specimen.
How I do it
SILS with virtual ports — During SILS, I use a new devices, the endo-grasp which was inserted via 5 mm port and act as virtual assistant. The endo-grasp make good exposure of operative filed by excellent counter-traction and fascinating the SILS procedures.
Natural Orifice Specimen Extraction (NOSE) – removal of specimen via anus or vagina without abdominal incision in laparoscopic colectomy.
1.NOSE via anus
The mobilization of splenic flexure was always needed. After high ligation of inferior mesenteric artery and vein, the left side colon was fully mobilized. Tran section of colon or rectum was done by endo-GIA. A TEM scope (20 cm in length) was inserted into rectal stump and the stump was open. The specimen was pulling out of anus via TEM scope. Resection of specimen was done and purse string suture was completed with insertion of anvil extra-corporeally. The anvil was put back into peritoneal cavity and rectal stump was re-closed by endo-GIA. The end-to end anastomosis was achieved by double stapling technique.
2. NOSE via vagina
In female patients, the TEM scope was inserted in vagina and posterior vagina wall was open. The specimen was pulling out of vagina via TEM scope. The rest procedures were same as above.
Preliminary result:
The SILS + virtual ports had been done in 10 patients with benign diseases or early cancer. No conversion and any major complications.
The NOSE had been done in 26 patients. Only one anastomotic leakage occurred (3.8%) and no other major complications noted. All patients recovered very quickly, could walk and water intake in the 1st postoperative day and the cosmetic was extreme good..
Conclusion:
The NOSE and SILS + virtual ports approach were feasible and the learning curve was not so difficult. In near future, for improvement of NOSE, there are new technologies needed to do intra-corporeal anastomosis. I expected a collaborative clinical trial to test the true value of NOSE procedure. 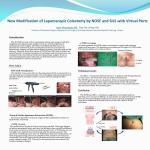