BACKGROUND: The recent advances in laparoscopic surgery developed new technologies that can be established soon. However, it is difficult to find in medical literature articles considering the patient’s preferences regarding these new surgical accesses.

METHODS: A questionnaire was applied to medical students. At first there was brief information about the techniques (Open Surgery, Laparoscopy, Minilaparoscopy, LESS and NOTES). Hypothetically, the participant would be submitted to a cholecystectomy. The first question was related to the opting for the open method. The second asked if they would consider LESS and NOTES despite these techniques are not totally safe yet. At the third, they rank in order of their preferences the different methods. The fourth asked which was the preferred among the new surgical approaches. The fifth was about the choice of a route for NOTES. At the sixth they must choose between LESS and Minilaparoscopy. The last asked which is the most important factor related to the decision among the approaches.

RESULTS: Two hundred thirty-eight questionnaires were answered. There were 135 female and 103 male respondents. The majority of the persons (83%) was between twenty and twenty-nine years old. Overall, 95 participants would consider the open surgery despite the four others options (LESS, NOTES, Laparoscopic and Minilaparoscopy). Among the new approaches (LESS, NOTES and Minilaparoscopy), the most popular as first option to the procedure was Minilaparoscopy which had the preference of ninety-two persons (39%). After that was LESS with 69 and in third place was NOTES with fifty-five. If only NOTES, LESS and Minilaparoscopy were offered, the participants´ preference was the same with to Minilaparoscopy (a hundred sixty-three). When only LESS and Mini were possible, 69% would prefer Minilaparoscopy. The overall preference for the route of NOTES was the oral (61%). The majority of the participants (85%) chose the safety as the most important factor to make a decision. And a hundred ninety-three respondents would not consider NOTES and LESS as therapeutics choices unless these procedures have proved its safety and effectiveness.

CONCLUSION: Minilaparoscopy has been preferred for the patients who considered the safety the most important aspect, what makes to infer that this patients consider Minilaparoscopy as the safer technique. 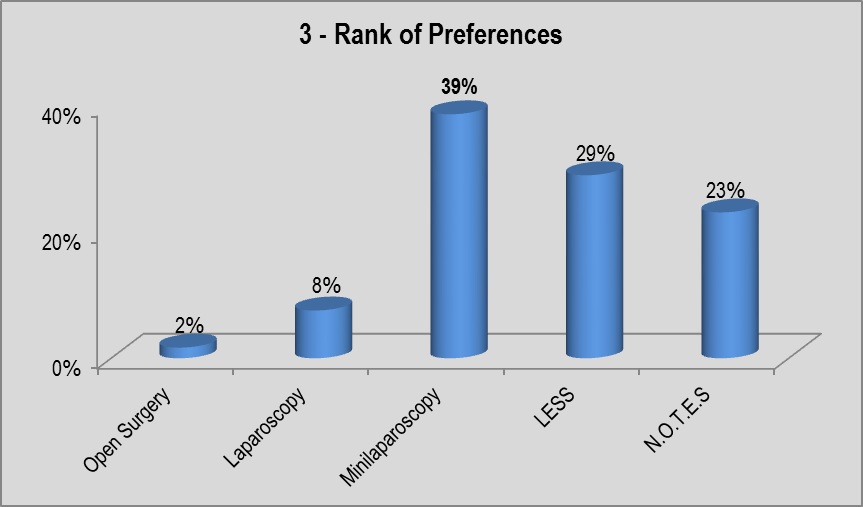 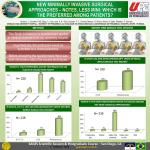