Introduction
The prognosis of recurrent oesophageal cancer following two stage oesophagectomy (TSO) with curative intent remains poor and various available treatment modalities aim at palliation of symptoms, most significant being the dysphagia due to intrinsic or extrinsic recurrence. Role of self-expanding metallic stents (SEMS) in the palliation of dysphagia caused by intrinsic mucosal recurrence is well established while the use the SEMS in relieving the dysphagia caused by extrinsic compression from loco-regional nodal recurrence at hiatus is still not widely adopted.
We in this prospective study aim to evaluate the role of SEMS in palliating dysphagia secondary to the neo-oesophageal (pulled up stomach) outlet obstruction due to extrinsic compression.

Methods
All patients with clinically suspected recurrent disease following TSO with curative intent underwent endoscopy, water contrast swallow and contrast enhanced CT scan using a standard protocol. All patients were discussed in the Upper GI Multi Disciplinary Meeting and appropriate treatment decision was made in each case.
Patients with total dysphagia secondary to extrinsic compression at hiatus were selected for endoscopic palliation and included in this study. These patients underwent therapeutic endoscopy and insertion of a self-expanding Ultraflex metallic stents straddling across the obstructed outlet of the neo-oesophagus under x-ray control and sedation. Check water contrast swallow was carried out to confirm the position and patency of the SEMS.

Results
A total of four patients satisfied the criteria and were included in the study. The stenting procedure was successful in all of them with no procedure related complications. The dysphagia improved very significantly in all, allowing soft diet in the short survival period after stenting (median survival – 28 days; range 5 – 58 days).

Conclusion
We recommend endoscopic stenting as one of the options to consider in patients with recurrent oesophageal malignancy at the hiatus. This technique improves the quality of life for the rest of their short survival by palliating dysphagia successfully. 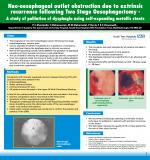