Necrotizing Fasciitis is a Rare Yet Morbid Complication Following Laparoscopy

Background: Necrotizing Fasciitis (NF) is a rapidly progressive infection involving the subcutaneous tissue and fascia associated with a significantly high morbidity and mortality. Few cases have been reported of NF arising secondary to laparoscopic port site placement. In the age of minimally invasive surgery, awareness of such a fatal infectious complication is essential to avoid delay in diagnosis and subsequent significant morbidity or mortality.

Case Presentation: This is a case of a 61-year-old female, past medical history significant for hypothyroidism and diabetes mellitus, who presents with two weeks of progressive abdominal pain, subjective fevers, chills and malodorous discharge from her umbilicus surgical port site. These symptoms developed less than one month after an elective laparoscopic bilateral salpingo-oophorectomy. CT scan was performed and revealed a 4.2×5.7cm fluid collection at the level of the umbilicus with extensive gas noted within the subcutaneous fat of the anterior abdomen; findings consistent with necrotizing fasciitis. Laboratory values, including white blood cell count (WBC) 18.6 and lactic acid 3.1, were consistent with the development of clinical sepsis. As a result, this patient emergently underwent extensive sharp excisional debridement of necrotic abdominal skin, subcutaneous tissue, muscle and fascia. The abdomen was copiously irrigated and left open with extensive packing. A total of four surgical debridement and washouts occurred throughout the hospital stay, ultimately resulting in abdominal wall closure. Final surgical pathology revealed necrotizing fasciitis and abscess. Conclusive wound cultures revealed Methicillin-sensitive Staphylococci Aureus (MSSA). The postoperative course was complicated by multi-system organ failure including acute renal failure, pulmonary effusions, and acute respiratory failure secondary to severe sepsis. Ultimately, patient stabilized and was discharged to sub-acute rehab on a long term antibiotic regimen. The patient has remained stable after four month follow up.

Discussion: Necrotizing fasciitis is a rare postoperative complication of laparoscopic surgery. Routine use of perioperative prophylactic antibiotics has been shown to significantly improve the number of surgical site infections (SSI). Early detection and high clinical suspicion is crucial for proper management of NF. Treatment with aggressive and multiple surgical debridement and washouts, in conjunction with intravenous broad spectrum antibiotics, is imperative in limiting the grave morbidity and mortality associated with NF. 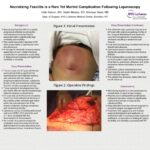