NATIONWIDE ANALYSIS OF OUTPATIENT LAPAROSCOPIC SLEEVE GASTRECTOMY AND LAPAROSCOPIC GASTRIC BYPASS OVER THE PAST DECADE: RISK FACTORS FOR MORBIDITY AND READMISSION

INTRODUCTION: Bariatric patients are discharged frequently within one postoperative day. The aim of this study was to compare the safety of outpatient laparoscopic sleeve gastrectomy (LSG) and Roux-en-Y gastric bypass (LRYGB) and to identify patients at risk for complications.

METHODS AND PROCEDURES: Adult patients with obesity (BMI≥35) who underwent an elective outpatient LSG or LRYGB were identified using the American College of Surgeons National Surgical Quality Improvement Program (ACS-NSQIP) database from 2005 to 2015. Multivariable logistic regression analysis was performed to identify risk factors for 30-day overall morbidity and readmission (2011-2015) for each procedure type. 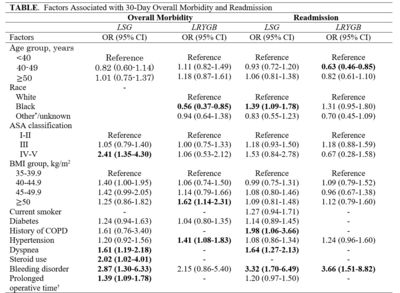