Neuroendocrine (carcinoid) tumors of the gastrointestinal tract are rare, although their prevalence has steadily increased over the past three decades. There are many therapeutic options for these patients, however surgery offers the only potentially curative treatment.

We report the case of a previously healthy 47 year old male, who presented with hematochezia. After negative upper endoscopy and colonoscopy, a capsule endoscopy was performed, revealing multiple ulcers with active bleeding at the jejunum and ileum. Continued bleeding warranted an operative approach; laparoscopy revealed at least 5 lesions on a 50cm segment of small bowel. A laparoscopically-assisted bowel resection was performed. The patient was discharged without complications on post-op day 4. The pathology report revealed multiple (9) carcinoid tumors, the largest of which measured 1cm. No transmural infiltration was noted.

Tumors of the small intestine are an infrequent cause of obscure gastrointestinal bleeding, however one must bear in mind this possibility. The presence of multiple carcinoid tumors has been previously noted, although perhaps it remains underreported. In 2003, Yantiss et al. reported multiple tumors in 18 out of 68 patients with carcinoid tumors of the ileum, and this appears to remain the largest published series to date. These patients appear to be younger at presentation and have a higher recurrence and death rate. 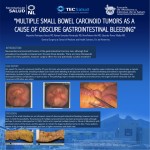