METHODS AND PROCEDURES From April 2006 to August 2011, a total of 130 consecutive patients who were diagnosed rectal cancer underwent a robotic low anterior resection (LAR) by a single surgeon at Severance Hospital, Yonsei University College of Medicine, Seoul, South Korea. Robotic LAR was performed on all the patients using the hybrid technique with the da Vinci® surgical system (Intuitive Surgical, Sunnyvale, CA, USA). The moving average method and the cumulative sum (CUSUM) were used to analyze the learning curve. The risk-adjusted CUSUM (RA-CUSUM) analysis by using logistic regression was used for evaluation of the points which showed completion of the surgical procedure in terms of R1 resection, conversion, postoperative complications, harvested lymph nodes less than 12, and local recurrence. Perioperative clinical outcomes and pathologic results were compared among the learning curve phases. Postoperative complications were graded by the Dindo classification. A p-value of less than 0.05 was considered statistically significant. 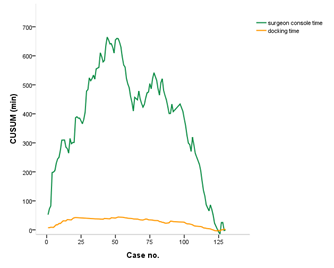 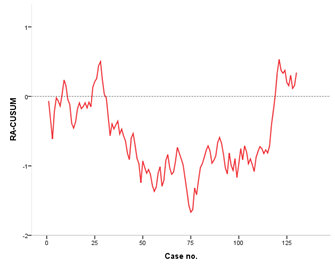