Introduction: Although multiple esophageal motility disorders have been defined manometrically, the underlying esophageal pathology is not always clear. Esophageal function testing(EFT), which combines manometry and multichannel intraluminal impedance (MII), has been increasingly useful in assessment of the Esophageal Motility disorders. MII allows the assessment of bolus transit. Impairments in bolus transit remain poorly understood. This study assesses the most likely level of impaired bolus transit when abnormalities are noted by impedance which can help to further characterize esophageal motility disorders.
Methods: Consecutive EFTs done between September 2007 to August 2008 were reviewed retrospectively. Patients underwent 10 liquid and 10 viscous swallows. Data was collected including diagnosis, medication use, symptoms, and EFT results of liquid and viscous swallows. Bolus transit is measured at 5, 10, 15 and 20 cm above the gastroesophageal junction (GEJ). The initial level of impaired bolus exit for each swallow was recorded. Data is reported as mean+SD.
Results:One hundred and nineteen patients (48% male) underwent EFTs. One patient could not tolerate catheter insertion therefore is excluded . The most common presenting symptoms were dysphagia (47%); heartburn (44%); chest pain (24.6%) and GERD (18%). The most commonly reported diagnoses were normal manometry (54.2%); ineffective esophageal motility, (11.9%); and achalasia (10.2%). Mean LES pressure was 24 ±13.9 mmHg. Mean peristalsis was 81 ± 27.5 %. Mean contraction amplitude was 84 ±46.6 mmHg. Of 2358 swallows, 837 (35.5%) were incompletely transmitted. Of 2358 swallows, 837 (35.5%) were incompletely transmitted. Of these, 39%, 41%, 15.6%, 4.4% did not exit at 20 cm, 15 cm, 10 cm, and 5 cm above the GEJ respectively. Of 118 patients, 64 had normal liquid bolus transit (group A), and 54 had abnormal liquid bolus transit (bolus transit 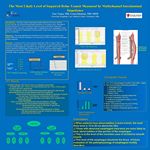