Mortality After Esophagectomy Is Heavily Impacted by Center Volume

Introduction: The effects of hospital volume on in-hospital mortality after esophageal resection are disputed in literature. We sought to analyze treatment effects in patient subpopulations that undergo esophagectomy for cancer based on hospital volume and to analyze if low-risk subgroups exist.

Methods and Procedures: We performed a retrospective analysis of the Nationwide Inpatient Sample from 1998-2011. Patients who underwent open or laparoscopic transhiatal and transthoracic esophageal resection were identified using ICD-9 codes. Patients <18 years and those with peritoneal disease were excluded. Multivariate logistic regression analyses were used with mortality as the independent variable to evaluate the effect of low (<6), intermediate (6-19), and high (≥ 20) hospital volume of esophagectomies.  These analyses were repeated in different subsets of patients to determine if hospital volume affected mortality depending on the subpopulation evaluated. Subgroups were created depending on age, race, gender, operative approach, comorbidities, and tumor pathology.

Results: A total of 23,751 patients were included. The overall perioperative mortality rate was 7.7% (low volume: 11.4%; intermediate volume: 8.39%, high volume: 4.01%, all p<0.05), and multivariate analysis revealed that high hospital volume and the laparoscopic approach had a protective effect (OR 0.54 and 0.71, respectively). Independent predictors of mortality were age ≥ 65 years, African American race, diagnosis of squamous cell carcinoma (SCC), comorbid disease (cardiovascular, pulmonary, renal, and hepatic), and hospital volume of ≤ 20 esophageal resections for malignancy per year. On subgroup analyses for low and intermediate volume hospitals, mortality was uniformly elevated for the subpopulations when comparing to high volume hospitals (p<0.05). There was no difference in mortality between low and medium volume hospitals and between subgroups. 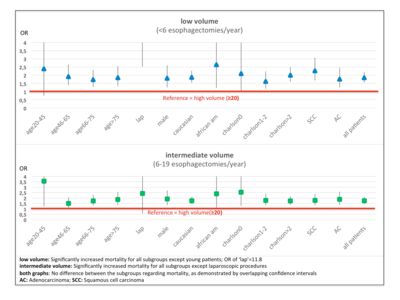 Conclusions: No lower risk subgroup could be identified in this nationwide collective. This analysis emphasizes that perioperative mortality after esophagectomy for cancer is heavily impacted by center volume and the usage of minimally invasive techniques.