Background: Minimally invasive surgery has arisen in an attempt to lose less blood and have less postoperative pain, fewer and smaller scars, and a faster recovery than a patient would after open surgery. We report a case of the thoracoscopic approach in the prone position in patient admitted for the diverticulum in midthoracic esophagus.

Methods: We herein describe a 62-year-old male with dysplasia of esophagus in the Rokitansky diverticulum. The ingenuities of our surgical techniques were as follows: (1) The patient was placed in prone position. (2) Three 12mm trocars were used. (3) Azygos vein arch was split. (4) The base of diverticulum was clipped by the endoscopic clamper. Retracting the clamper upward with string, the diverticulum came free from the bronchial lymph node easily. (5) The diverticulum was removed with the endocutter, and bioabsorbable non-woven fabric was sandwiched between the stapled line and the membranous portion of the left main bronchus.

Results: Operative time was 102 min. Blood loss was almost 0 g. Postoperative recovery was uneventful. The patient was discharged on postoperative day 9. Histology showed the resection margins were clear. Surgical findings were as follows: (1) Esophagus was stripped as little as possible so that the maximal feeding vessels were preserved. (2) The clamper connected with the string made it possible to reduce to 3 trocars. (3) Bioabsorbable non-woven fabric separated the stapled line from the tracheal membrane in ease and safety.

Conclusions: The described procedure for Rokitansky diverticulum is a minimally invasive alternative to the conventional diverticulectomy that looks promising. 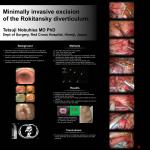