Background: Laparoscopy is currently the standard approach to cholecystectomy. Large series of robotic assistance have yet to be performed

Results: We identified a total of 187 patients (RC 119 pts. vs LC 68 pts.) that underwent cholecystectomy for various indications including symptomatic cholelithiasis, acute and chronic cholecystitis, choledocholithiasis and pancreatitis. In both LC and RC groups, there were no statistical differences noted in the pre-operative variables including age (LC 44.6yrs vs RC 43.67yrs, p-value 0.71), sex (male 23.5% vs. 22%, female 76.5% vs. 78%, p-value 0.8586), BMI (LC 32.8 vs. RC 32.8, p-value 1) and ASA class. There was no difference in operative time (LC 89.45 mins vs RC 90.81 mins, p-value 0.76), but in the LC group, two cases were converted to open cholecystectomy while there were no conversions in the RC group (p-value 0.13). Complex procedures like CBD exploration were managed without conversion in the RC group. There were no significant differences in mortality or minor morbidity rates (Clavien 1&2: RC 19.3% vs LC 17.6%). However, one patient in the LC group had a bile leak requiring ERCP and another patient required an ICU admission after open cholecystectomy. Statistically these findings were not significant. Length of stay was similar in both groups (LC 1.37 days vs RC 1.39 days, p-value 0.90).

Conclusion: The robotic approach is an alternative to laparoscopic cholecystectomy with similar outcomes. Its advantages in 3-D visualization of anatomy, ability to perform advanced procedures, low learning curves for trainees and safety may outweigh its increased costs. 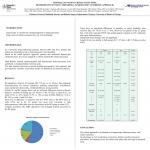