Microlaparoscopy versus conventional laparoscopy: results from a single-center study

In recent years, the use of microlaparoscopic procedures (trocar incisions less than 3mm) has been gaining popularity. It is thought that the smaller incision will lead to decreased postoperative pain, better cosmetic results, decreased hospital length of stay (HLOS). We examined our experience with microlaparoscopy with two common procedures: cholecystectomy and Heller myotomy.

Following Institutional Review Board (IRB) approval, a retrospective chart review of all patients who presented for cholecystectomy and heller myotomy was performed. Patients with incomplete records were excluded. Three hundred fifty-four patients who underwent microlaparoscopic versus conventional laparoscopic cholecystectomy from September 2011 to January 2014 were identified from surgical reports. Statistical comparison between patient demographics, ASA classification, perioperative parameters, hospital length of stay (HLOS), 30-day readmissions and returns to the emergency department (ED) was performed via univariate analysis.

Although we concluded that microlaparoscopy is a safe alternative to conventional laparoscopy, in our series there was no statistical significance noted in 30-day readmission or ED return. Patients undergoing microlaparoscopic cholecystectomy had significantly lower BMI, less hospital stay prior to surgery, and HLOS following surgery. Due to the small number of Heller myotomies, no statistical significance was seen. 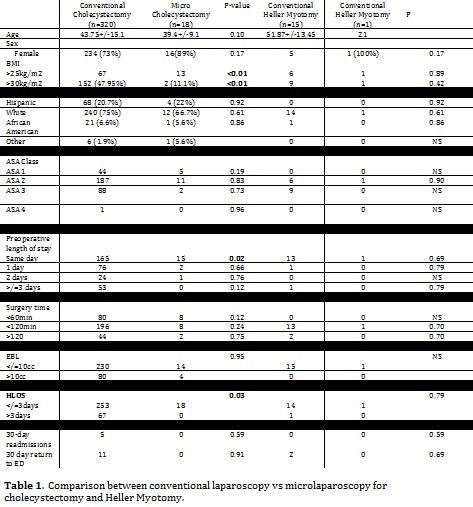