Methylene Blue Or Upper Gi, Which Is More Effective for Detecting Leak in Gastric Bypass Patients?

Background: Postoperative leak from an anastomosis is a serious complication following gastric bypass that results in morbidity and could even lead to mortality. The bariatric surgeon has several tools to assess this adversity. There has been debate as to which method is more superior and furthermore whether these methods should be routinely or selectively used.

Purpose: The aim of our study is to evaluate and compare whether methylene blue or upper gastrointestinal(UGI) study is more effective in detecting an anastomotic leak following gastric bypass.

Material and Methods: Between May 2013 and August 2013, 40 patients underwent laparoscopic Roux-en-Y gastric bypass(LRYGB). Linear staplers were used to create the gastrojejunostomy and the jejunojejunostomy. All staple lines were over sewn for reinforcement. All patients underwent routine UGI studies and methylene blue challenge on postoperative day 1. A retrospective review of a prospectively collected database was performed for all patients.

Results: Of the 40 patients in this study there were 33 females(82.5%) and 7 males(17.5%). Mean age was 49.7±10.1years (range, 21-66), and mean preoperative body mass index was 46.2±7.0kg/m2 (range, 35.8-63.8) at the time of procedure. Mean length of hospital stay was 3.8±8.5days (range, 1-53).
There was no detection of leak in any of the initial routine UGI studies or methylene blue challenges. One patient had fever and tachycardia which prompted a repeat UGI series which confirmed a leak and fluid collection. Regarding her second UGI positive and methylene blue negative, there was no statistical difference in detecting the leak between UGI and methylene blue (p>0.32). This patient was treated with percutaneous drainage and conservative measures. A second patient who developed a leak also had a negative initial routine UGI studies and methylene blue challenges. This patient required reoperation for staple line disruption.

Conclusions: Delay in diagnosis of anastomotic leak can have a significant impact on morbidity and mortality in postoperative LRYGB patients. Both UGI studies and methylene blue challenge are commonly used to assess this awful complication. Based on this data UGI studies and methylene blue challenge had little or no significant difference in detecting a postoperative leak. Furthermore, these tests may have limited utility and may warrant adjuncts to aid in leak detection. 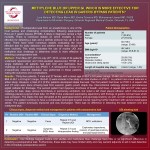