Metabolic and Inflammatory Responses After ERCP Procedure as a Minor Surgery

Background: We aim to evaluate the metabolic and inflammatory responses after ERCP procedure in patients who have common bile duct stones.

Conclusion: ERCP procedure is a kind of invasive attempt as known, also causes, with its effects, systemically inflammatory response in the body. This response, mostly not staying at the local stage, becomes systemic inflammatory response. Therefore, before ERCP is performed, the applications of other non-invasive methods of diagnosis are strongly advised. 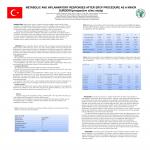