Complication rates in both groups were classified according to the modified Clavien system and included MIS: grade I= 10, grade II= 4, grade III/IIIa/IIIb= 4, grade IV/IVa/IVb= 4; Mentored: grade I= 2, grade II= 1, grade III/IIIa/IIIb= 2, grade IV/IVa/IVb= 3, grade V= 1. Conversion rate was 25.9% (7) in the MIS group; Mentored: 4.5% (1). There was 1 death (in mentored group secondary to complications from ischemic bowel), and 1 anastomotic leak requiring reoperation (in mentored group).
Conclusions: MIS surgeons can be a resource for established general surgeons to incorporate laparoscopic colorectal resections with comparable and acceptable oncologic results. 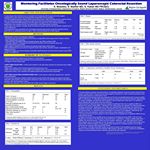