Background: Laparo-endoscopic single-site surgery ( LESS ) is limited by loss of triangulation and internal instruments conflict. To overcome these obstacles, some approaches have been introduced: articulated instruments and cross-handed manipulation which causes the right hand to control the left instrument tip and vice versa. The aim of this study was to compare task performance of these approaches based on a mechanical evaluation platform.

Results: Group A presented significantly better time scores than group B, and group C was more time consuming in comparison to group A and group B during the performance of the tasks(P<0.05). Comparing of average load required to perform the suture pass-through rings task, it differed significantly between dominant and nondominant hand in all groups(P<0.01) and was less in group A and group B than group C in dominant hand (P<0.01) ,while almost the same in all groups in the nondominant hand. In terms of average load requirement to accomplish clip-cut task, it was almost equal not only between group A and B, but also between dominant and nondominant hand while the increase reached statistical significance comparing group C with other groups (P<0.05).

Conclusions: Compared with conventional devices and maneuvering techniques, articulated instruments and cross-handed manipulation are associated with longer operation time and higher average load. More comfortable, effective and favorable instruments should be developed in the future for laparo-endoscopic single-site surgery. 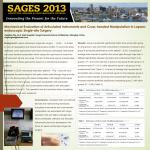