INTRODUCTION
Tissue percent oxygenation levels are affected by the amount of compression applied, the purpose of this study was to develop a method to evaluate the change in tissue oxygen saturation level during compression and uncompression. During surgery, tissue is compressed for various reasons, including grasping, manipulation and stapling. Excessive compression may irreparably damage tissue causing ischemia and necrosis. However, appropriate tissue compression is necessary to bring tissue into apposition for surgical repair techniques, such as anastomoses. A delicate balance needs to be reached between the compressive forces needed to prevent bleeding or leakage and allowing the blood flow necessary to promote healing.

METHODS AND PROCEDURES
Uncompressed tissue thickness measurements were taken at multiple locations along the greater curvature of the porcine stomach prior to testing. Each location was compressed and uncompressed between the anvil and cartridge of a modified surgical circular stapler in a stepped fashion and held at each step for a minimum of 15 seconds for data collection. The anvil was modified to allow a T-Stat® Tissue Oximeter 2-mm probe (CTH-060-END,Spectros, CA) to be placed on the tissue and the percent oxygen saturation (%StO2) was measured during each step. This %StO2 was measured as a function of time and correlated to the gap (distance between anvil and cartridge face). The amount of compression applied to the tissue was determined based on the gap and the percent strain was calculated based on the change in thickness.

RESULTS
The gap, amount of perfusion (%StO2), and the percent strain were graphed as a function of time. The dwell time at each step was exaggerated to allow for visualization of %StO2 changes in the tissue. When the samples were uncompressed, reperfusion to %StO2 levels equivalent to the initial baseline level occurred in all of the samples evaluated (n = 33). Typical curve of the results is presented.

As illustrated in the graph, %StO2 decreased as the gap decreased, indicating that as tissue strain increased (amount of compression) the blood flow to the area was compromised and the tissue became hypoxic. Several studies have evaluated the effects of perfusion and oxygenation on healing and successful anastomosis [1]. This study may enable a method of correlating tissue damage to compression and blood flow. The reperfusion of all tissue samples to %StO2 equivalent to baseline indicates that the compression exerted during this test did not illicit a short-term negative effect. 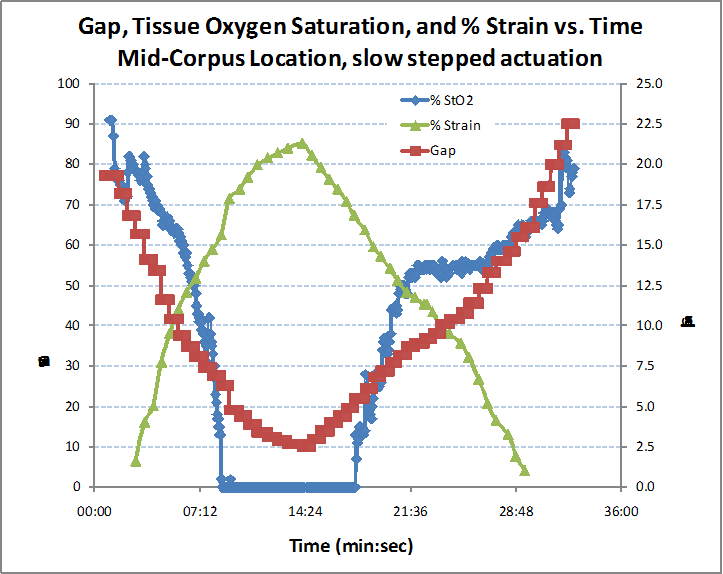 CONCLUSIONS
The method developed was successful at measuring tissue oxygen levels at various stages of compression. Measuring the %StO2 during clamping may be valuable for evaluation of tissue health at acute time points and may correlate to healing and tissue viability in chronic studies. Future studies will characterize the tissue response in relation to the rate and force of compression per anatomical location and the impact of stapling.