INTRODUCTION
Fibromuscular dysplasia (FMD) is a non-inflammatory and non-atherosclerotic disorder, which causes renal disease in 60-75%, cerebrovascular disease in 25-30%, visceral in 9% and extremity arteries are affected in 5% of the cases. There are just a few cases reported in literature, it was first described in 1938 by Leadbetter and Burkland. It is an extremely rare cause of gastrointestinal bleeding. We report the first known case in our country of rectal fibromuscular dysplasia.

CASE REPORT
A 46 years old male was admitted with history of pelvic pain, urinary urgency and dysuria of one week evolution. An abdominal CT scan showed thickening of the rectum wall and distal sigmoid with increased vascularity of the area, as well as rectal and peri-rectal inflammation.
A colonoscopy was completed, which revealed the presence of blood in the transverse colon with active arterial bleeding 10 cm from the anal margin. An attempt to stop bleeding was made with adrenaline injection and clips without success, bleeding control was finally achieved with Ligasure®.
An angiography was performed due to the high clinical suspicion of an arteriovenous malformation; it revealed an area with apparent hypervascularity and arteriovenous malformations. The patient underwent low anterior resection /colo-anal anastomosis and protective ileostomy. Patient outcome was favorable.

DISCUSSION AND CONCLUSIONS
The pathogenesis of FMD is still unknown, it has been associated with various collagen disorders and alpha antitrypsin deficiency. Symptoms depend on the affected arteries, ranking from abdominal pain to gangrene and bleeding (ischemia or aneurysm). There are no management guidelines, nor randomized controlled trials. To our knowledge this is the first case of visceral FMD reported in our country, and one of the few in the world. 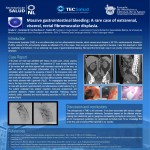