Introduction: Bariatric surgery results in significant and life-changing weight loss for a majority of patients. However, a significant minority of individuals fail to reach their target weight or have significant weight regain after surgery at long-term follow up. Revisional surgery for obesity carries significantly higher morbidity compared to primary operations. Other treatments, such as endoscopic therapies are still investigational. We sought to compare the excess weight loss (EWL) achieved by patients undergoing four treatment options for reweight gain: supervised diet and exercise, Restorative Obesity Surgery, Endolumenal (ROSE), and Gastric Banding Over Bypass (BOB), and Endoscopic Closure of Gastric-Gastric Fistulas (ECF).

Methods and Procedures: A retrospective analysis was performed on patients who had undergone prior bariatric operations who were seen for either weight re-gain or failure to lose weight from 2003 to 2011. Data was reviewed from the electronic medical records of patients with body mass index (BMI) > 25 at the time of follow up. Patient records were reevaluated at 3 months, 6 months, and annually after intervention to determine estimated weight loss and change in BMI. These endpoints were the primary outcome measures.

Results: Eighty patients were identified and comprised the study population.  Mean BMI was 41.2 kg/m2, mean weight 116.5 kg, and 50% of patients qualified as morbidly obese at that time. Twenty one patients failed to follow up after first presentation.  Forty-two patients underwent supervised medical weight loss, diet, and exercise management, while 17 patients underwent operative management for their weight gain, based on surgeon’s recommendations and patient preference. ROSE was performed on eight patients, BOB on seven, and ECF on two. At one-year follow up, mean BMI decreased by 4.7kg/m2 (±3.8 SD) for the patients who underwent surgical intervention (ROSE, BOB, or ECF), compared with a 0.3kg/m2 increase (±2.2 SD) in mean BMI for the supervised weight loss group (p 0.001). The occurrence of diabetes, hypertension, and obstructive sleep apnea decreased when patients were re-introduced to bariatric treatment of any type. The mean number of comorbidities per patient decreased for both treatment groups, and was not significantly different between the diet and exercise and the surgical intervention group.

Conclusion: Weight regain does occur in patients who undergo bariatric surgery, and is often accompanied by recurrence of associated comorbidities. Patients who underwent either ROSE, BOB, or ECF had significantly greater weight loss compared to all patients who received recommendations for diet and exercise alone. These surgical and procedural interventions can result in greater decreases in BMI for patients compared to supervised diet and exercise. 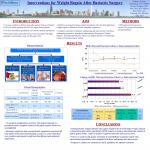