Management of the acute appendix mass: A survey of Irish surgical practice

Aim: To assess variation in management of the acute appendix mass among Irish surgeons.To date, no studies have been published regarding surgical management of this condition in Ireland and there is indeed no clear consensus or set of guidelines in the international literature pertaining to optimal care of these patients. To address this obvious dearth in the literature, the present study aims to determine the preferred approach taken to management of the acute appendix mass by both trainee and consultant surgeons in Ireland.

Background: The management of the acute appendix mass is controversial with no clear consensus in the literature. Traditionally, the approach has been conservative followed by interval appendicectomy. As there is currently no universal practice, development of management protocols is paramount. Issues for debate include timing of surgery, whether intervention should be laparoscopic or open and the necessity of interval appendicectomy.

Methods: A survey was designed and distributed to 100 Irish consultant surgeons and 17 final year specialist registrars (SpR) in an attempt to determine how the appendix mass is currently being treated in Ireland.

Results: The response rate amongst consultants was 57% (57/100). The response rate amongst specialist registrars was 76% (13/17). 85.1% of respondents indicated that they initially adopt a conservative approach towards management of the appendix mass. If a conservative approach was initially successful, 81% indicated that they would perform an interval appendicectomy. If emergency appendicectomy was performed then 58% of surgeons said they would adopt a laparoscopic approach. The percentage performed laparoscopically increased to 74% if interval appendicectomy was performed following conservative management. 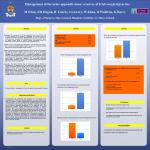