Introduction:The caustic ingestion is a serious surgical pathology that requires a multidisciplinary management. Its prognosis depends on the nature of the ingested agent, the early maturing of the lesions and late complications. Our Purpose is to identify diagnostic, therapeutic and prognostic features of this pathology

Methods: it is a retrospective study that included 100 patients whom were taken charge of at the General surgery department “A” at the Charles Nicolle Hospital of Tunis , Between 2005 and 2013 for a caustic injuries.

Conclusion: The caustic injuries of the digestive tract have an important aftermath .The prevention and the education of the population has a primary role in the decrease of impact of this pathology. 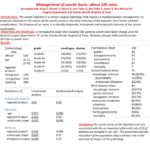