Background
Left lateral video-assisted thoracoscopic surgery of the esophagus (VATS-E) has been adopted by Japanese medical centers and university hospitals that frequently treat patients who have esophageal cancer. Palanivelu et al, have reported that a clear operative field for esophagectomy and lymph-node dissection could be obtained in prone VATS-E. A clear operative view of the middle and lower mediastinum has been obtained in prone position, but the working space in the upper mediastinum is limited and lymph-node dissection along the left recurrent laryngeal nerve is difficult in prone position. We report to overcome the problem by our technique and safe anastomosis. Methods of VATS-E, lymph node dissection along the lt. recurrent laryngeal nerve and anastomosis in prone position.

Esophagectomy and the lymph nodes around the trachea and bronchus, above the diaphragm and along the bilateral recurrent laryngeal nerves are performed in prone position, owing to the working space created by gravity and pneumothorax. Working space at the left upper mediastinal area is limited, and the residual esophagus is stripped in the reverse direction and retracted toward the neck to obtain the space and the lymph nodes are dissected. Lymph-node dissection along the left recurrent laryngeal nerve were performed after esophageal stripping in prone VATS-E. The esophagogastric anastomosis was performed using a 25 mm anvil and circular stapler (CDH, Ethicon, Johnson &. Johnson). At first the circular stapler is introduced into the gastric conduit and joined to an anvil, and close a little because anastomosis is performed in the narrow neck field. And then an anvil is placed into the proximal esophagus and secured by means of a pursestring suture (PURSTRING™, COVIDIEN Group). The gastric conduit opening is closed using an additional firing of a 60 mm linear stapler (Echelon flex 60, Ethicon, Johnson &. Johnson) and the anastomosis is completed.

Results
1.The mean blood loss is about 30 ml in the chest procedure and mean operative time 272 minutes.
2.The rate of anastomotic leak, postoperative pneumonia and the rate of recurrent laryngeal nerve paralysis were 0%(0/28), 11%(3/28) and 18%(5/28), respectively.

Discussion
1. Our result indicates that esophageal stripping in prone VATS-E allows for safe and straight forward lymph node dissection along the left recurrent laryngeal nerve.
2. The semi-prone position is better because both prone for VATS-E and left lateral for emergency thoracotomy positions can be set by rotating from the semi-prone position.
3. Our anastomotic technique is safe in the narrow neck field. 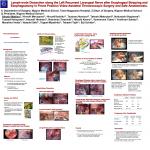