Introduction: Transumbilical single-port surgery is a potentially less-invasive approach to many types of abdominal surgeries and offers better cosmetic outcomes than conventional 3-port laparoscopic surgery. It avoids the complication of intercostal neuralgia and may reduce the risk of pulmonary complications after video-assisted thoracic surgery (VATS). This study evaluated the feasibility of transumbilical lung wedge resection.

Methods: Lung resection was performed in 11 beagle dogs weighing 5.9–8.5 kg. A 3-cm umbilical incision and one diaphragmatic incisions were made, and an endoscopic stapler was used. The diaphragmatic incisions were repaired using a V-Loc knotless suturing device (Covidien, Mansfield, MA) under video guidance. Animals were monitored daily for signs of postoperative infection. Laboratory (white blood cell count), and immunologic parameters were measured in all animals. Animals were sacrificed 14 days after surgery, and were subjected to necropsy with histologic evaluation.

Results: Accurate lung resection was achieved in 10 of 11 animals during a median operative time of 98 min (range, 60–165 min). Median lung specimen was 4.5 cm (range, 3.5–6 cm). In 1 animal, transumbilical lung resection was not possible and was converted to thoracotomy. All animals survived without major postoperative complications. At necropsy, evidence of uneventful healing of stapled resection margin and diaphragmatic wound were found. There was no evidence of vital organ injury or intrathoracic infection.

Conclusion: A transumbilical approach to thoracic cavity exploration and stapled lung resection is technically feasible. Primary suturing of the diaphragmatic incision is a simple and effective means of diaphragmatic wound closure. This may be an alternative to VATS for management of simple thoracic disease. 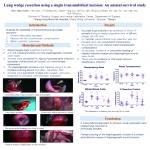