Background: The purpose of this study was to define the distribution of preoperative resting lower esophageal sphincter pressures (LESP) in achalasia, and to correlate this with symptomatic outcomes following laparoscopic Heller myotomy (LHM).

Methods: A single institution retrospective review of patients undergoing LHM for a primary diagnosis of achalasia between 1992-2005. Patients were divided into those receiving prior endoscopic therapy (botulinum toxin injection or dilatation) and those undergoing myotomy as primary therapy. LHM failure was defined as persistent dysphagia requiring reoperation or return of dysphagia to preoperative severity. Normal LESP was 6-26 mmHg as defined by manometric standards. Statistical comparisons were performed using Fisher’s exact test, with significance defined as a two-tailed p-value less than 0.05.

Conclusions: Excellent symptomatic relief is afforded to achalasia patients undergoing LHM as primary therapy, as well as patients with prior treatment whose LESP remains hypertensive. Patients with a non-hypertensive LESP following previous endoscopic therapy appear to be at increased risk of myotomy failure. 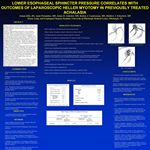