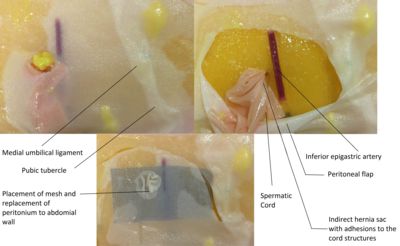 Objective: Robotic transabdominal pre-peritoneal (TAPP) repair has recently increased in popularity owing to the ease of technique compared to laparoscopic repair. The use of this technique however, is associated with a learning curve. Our primary objective was to design and test a realistic, low cost and adaptable model for training novices and surgical residents in TAPP robotic hernia repair. This is the first such model developed for the robotic platform.

Description of technology and methods of its use: We designed a model for transabdominal pre-peritoneal inguinal hernia (TAPP) repair using commercially available materials (Picture). The surgeon needs to create a peritoneal flap, reduce an indirect hernia, place the mesh to overlap the 3 potential hernia locations (direct, indirect and femoral spaces) and re-peritonealize the abdominal wall using intra-corporeal suturing. Landmarks available on the model included the medial umbilical ligament, the inferior epigastric vessels and the spermatic cord which aided peritoneal incision and dissection.

Preliminary Results: We tested our trainer on the Da Vinci Si platform. The model was mounted in a laparoscopic box. The port placement and actual view were so as to simulate the in vivo anatomy.  A zero degree camera and two robotic arms were used. Three robotic instruments were used for the procedure – hot shears, large needle driver and cadiere grasper. The peritoneal flap was developed using robotic scissors and blunt dissection. The indirect hernia sac was then dissected from the cord structures and reduced using blunt dissection.  A mesh was placed without suturing to the abdominal wall consistent with current TAPP technique. The peritoneal flap was closed over the mesh using running 2-0 Vicryl sutures. The entire procedure from peritoneal incision to peritoneal closure was completed in 20 minutes on average by experts. The model can be used to assess all the components of the GOALS-GH (Global Operative Assessment of Laparoscopic Skills-Groin Hernia) tool which has been validated for training in minimally invasive inguinal hernia repair. The approximate cost of this model is estimated to be $200-250, with most components of the model being re-usable.

Conclusion / future directions: We have developed and tested a low cost robotic model for training and assessment of novices in TAPP hernia repair. The model is currently being tested for construct validity. All the participants have reported the model to be more realistic than any other available model for minimally invasive inguinal hernia repair. Our low cost, realistic and adaptable simulation model can help bridge the gap in training and assessment of novices in the robotic TAPP hernia repair, contributing to safe introduction of this new technique in clinical surgery.