INTRODUCTION: The gold standard treatment for fulminant Clostridium difficile colitis is a total abdominal colectomy. However, this is associated with high morbidity and mortality. Diverting loop ileostomy and colonic lavage has emerged as an attractive option, but limited data exists. We sought to assess surgeons’ experience with the use of this procedure.

METHODS: After institutional review board approval, a 25 multiple-choice question survey was distributed from 09/2015-09/2016 to the members of the Canadian Association of General Surgeons, the Québec Association of General Surgeons, and the International Society of University Colon and Rectal Surgeons, and members of the Society of American Gastrointestinal and Endoscopic Surgeons research committee using societal distribution.

RESULTS: 101 surveys were completed. Of these, surgical trainees comprised 13.9% of respondents, while surgeons who had less than <5, >5 to 15, and >15 years of experience accounted for 20.7%, 40.2%, and 39.1% of respondents, respectively. The majority of respondents were from Québec, Canada (64.7%) followed by Ontario, Canada (11.1%) and various regions in the U.S. (7.1%). Surgeons' practice settings were academic (60.4%), community (41.6%), or private (5.9%). Half of the respondents treated at least one patient with fulminant Clostridium difficile colitis during the last year and 18% of respondents had performed at least one loop ileostomy with colonic lavage. After creation of the loop ileostomy, surgeons reported that colonic lavage was performed in the operating room, intensive care unit, and/or ward in 87.5%, 25.0% and 12.5% of cases, respectively. There was no consensus on the regimen for colonic lavage or post-operative management, however vancomycin flushes were given for 10-14 days by 61.2% of respondents and they were administered by a nurse in 93.0% of these cases. Failure of the loop ilesotomy requiring a conversion to total abdominal colectomy was reported in 13.3% of respondents. After resolution of fulminant colitis, 33.3% of surgeons closed the loop ileostomy in their patient(s) and 25.0% of surgeons reported a recurrence of Clostridium difficile infection after ileostomy closure. The majority of participants (78.7%) supported this procedure in patients with fulminant disease. Most surgeons (59.3%) voiced the need for more evidence and expressed an interest in performing this procedure within the confines of a study.

CONCLUSION: Loop ileostomy and colonic lavage is being used for fulminant Clostridium difficile colitis. The exact indications, technique and post-operative management remain unclear, and would be best determined by prospective, multicenter studies. 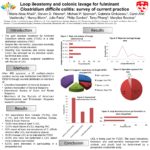