INTRODUCTION: Although surgeons are increasingly using a laparoscopic approach in rectal cancer surgery, its long-term outcomes have not yet been conclusively defined. In this study, we examine the longterm outcomes of laparoscopic surgery for rectal cancer at a single institution, with up to eleven years of follow-up.
METHODS: We performed a retrospective review of a prospective database for all open and laparoscopic rectal cancer surgeries performed at this institution between1996 and 2006. Longterm follow-up data was obtained through retrospective review of hospital and office charts. We excluded patients with T4 tumors, metastatic disease, synchronous cancers, and those who underwent emergency surgery. The primary endpoints were 5-year overall and disease-free survival and local and distant recurrence.
RESULTS: A total of 167 patients met our inclusion criteria. Of these, 93 had laparoscopic surgery and 74 had open surgery. The two groups were similar with respect to stage of disease and comorbidities. Patients undergoing open surgery were older on average (mean 70.9 years) than those undergoing laparoscopic surgery (mean 66.3 years, p=0.01). More open cases were done during the earlier years of the study. 8 laparoscopic cases (8.6%) were converted to open. The median follow-up period was 36 months (range 0-132 months). Overall survival was 94% at 60 months for laparoscopic cases, and 80% for open (p=0.013). Disease-free survival at 60 months was 96% for laparoscopic surgery, and 87% for open cases (p=0.024). 5.4% of laparoscopic cases and 13.5% of open developed local recurrence (p=0.1). Metastases occurred in 16.1% of laparoscopic cases and 29.7% of open (p=0.041).
CONCLUSION: Laparoscopic surgery for rectal cancer does not compromise overall survival, disease free survival, and local recurrence when compared to open surgery. While results of prospective randomized trials are awaited, it is likely that laparoscopic approach will become the standard of care for rectal cancer surgery. 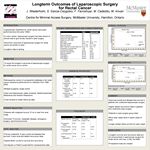